This literary candle has been inspired by Harry Potter and the Prisoner of Azkaban, a celebrated fantasy novel, written by British author J.K.Rowling, published in 1999.

The book cover and chapter illustrations of the first edition were made by Mary Grandpré, an American illustrator.

Since the release of the first novel, a young wizard Harry Potter along with his friends Hermione and Ron became somewhat of an extended family to the whole population of the planet Earth or the muggles.

The Harry Potter series is often considered the cornerstones of modern young adult literature. As of February 2018, the books have sold more than 500 million copies worldwide, making them the best-selling book series in history. The series has been translated into eighty languages. The last four books consecutively set records as the fastest-selling books in history, with the final installment selling roughly eleven million copies in the United States within twenty-four hours of its release.

Novels of many genres, including fantasy, drama, coming of age, mystery, thriller, adventure, horror, romance, the world of Harry Potter explores numerous themes and includes many cultural meanings and references. According to Rowling, the main theme is death. Other major themes in the series include prejudice, corruption, and madness.

The Expecto Patronum scent is captivating and magical. Just as the spell, it invites you to create a positive energy force. The scent begins with light traces of apple and delicate saffron threads. Luscious black currants and blackberries are the core of this fragrance. Warm base notes of anise and amber surround you in this sophisticated cocktail of a potion.

I got the Harry Potter candle for a friend who loves to read and named her cats after Harry Potter characters. She loved it and said the candle smells amazing.

I love it and it smells wonderful! 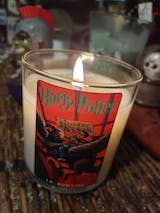